In the name of Allah, the Most Beneficent, the Most Merciful.

Le boyfriend and I spent a lot of time talking to each other about how we got to where we are now. I will never ever feel like we are a broken record. It always warms my heart and I always feel amazed by this love and the journey we have both taken since meeting each other for the first time on 12 May 2016.

We also kept uncovering the things we both hid from each other; the feelings, the thoughts, the internal conflicts, the debates, and so much more.

That made me realise that yes indeed this is what I need. I need someone who is honest and upfront with me. I have always wished that I have the power to read people’s thoughts so that I know what exactly is going on in their head. So to finally have someone who lets me in his head, it’s deeply satisfying.

You know how in my previous post I mentioned the desire to just lay on his chest and listen his heartbeat? Well, on that very same night just hours later, le boyfriend offered his chest to me after we’re legally married. It was simply as though he knew what I needed without me telling him. And no, at that point of time he did not visit my blog because duh he was talking to me on WhatsApp! Hehe!

That was also when I felt even more that yes, he is indeed my soulmate. Maybe, the chemistry I felt with the band was more of my chemistry with him without us realising? I don’t know. He is always telling me though that the chemistry between us is really good.

Well, today I uncovered more hidden truths from him! Goodness what revelations they were! I am one blessed girl. I have never been loved like this before and this is the love that I have been looking for all of my life.

Anyway, hello, December! My, how time flies. Yet again I have not been able to achieve all of my goals nor complete all of my challenges this year. Well, at least I can take into consideration certain things that will help me with my target-setting for 2017. In fact, I feel like setting them for 2017 now….should I? 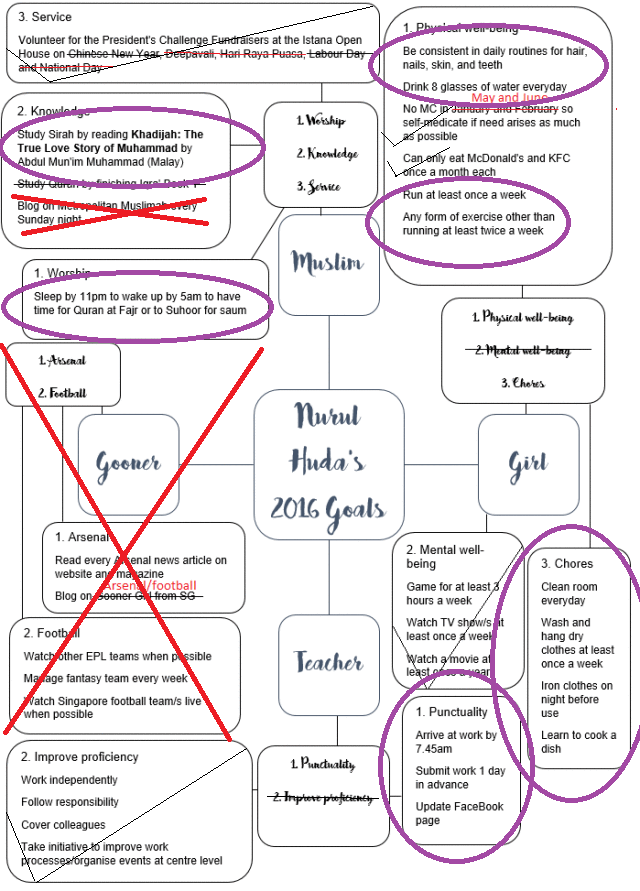 Ok so basically, I have achieved some of my goals, Alhamdulillah. So it’s not too bad! BUT! Just like my staff appraisal this year, apparently I kept neglecting the basics in order to achieve goals that I feel more invested in. Which really shouldn’t be that way.

Well, okay, it’s now 11pm and le boyfriend is bugging me to sleep. Hehs, I just remembered that I blogged about having a life coach or somebody to keep me on track with my goals. All praises to Allah, He has delivered that person to me…none other than le boyfriend! Hehehehe!

So I’ll cut this short and it looks like I won’t be setting my 2017 goals right now but when I have the time to do so. The ones circled in purple are the ones I have yet to achieve and will definitely be considering them for my 2017 plans. The ones in red simply means I’m doing away with them on top of not having achieved them. The ones in black are those I have achieved, Alhamdulillah.

So I think for the rest of December and basically 2016, I’ll just keep working on achieving that consistency in sleeping at 11pm and waking up at 5am.

As for the challenges, sabye sabye. I really cannot make it! Ahahahahaha!

Okay I better go off now.

And He is Knower of all things. – MM