I was mindlessly surfing YouTube while reeling from the exhaustion of midnight shift last night when I discovered this:

Some of the replies were really mean. Some were really sweet. It made me remember the times when I confessed or asked a dude out by text hahaha! And yes, I often received rejections or vagueness. I really can’t understand why guys would be so mean to girls asking them out. It took a lot of courage for the girls to do so and for guys to just be mean in their responses is just so selfish. Some guys would love to be asked out yet those with the privilege of receiving them just take it for granted. At least those girls know the truth about their crushes. Yeah, it hurts to find out that way but at least they can stop wasting their time pining after guys who are not interested in them.

And I know all about spending too much time wondering if a guy likes them back. I know now that I’m someone who invests 100% emotionally into someone I’m ‘in love with’. I put that in quotation because it is subjected to perspectives. To me, I was in love but to others I was only infatuated so using quotations seem more apt to balance both perspectives out. So congratulations to le fiance for scoring himself a girl who loves him forever. MUAHAHAHAHA!

I’ve been down with flu and cough for two weeks now since my first midnight shift ended last last Tuesday. I miss singing so much. Huhu.

Oh, oh! Le fiance bought me a mini-microphone so I can record my voice on PC hehehehe! It’s so cute! 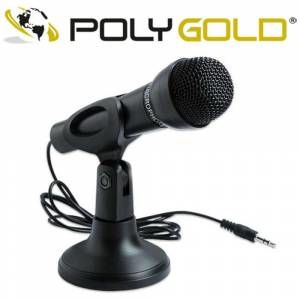 It only costs $6! Hehehe! We saw it at Challenger and I was like, “CAN I HAVE THIS PLEASE, BEE?” and he bought it for me. I’m so happy, wheeee~

Just tested it and it works! Yay! Hehehehe!

Speaking of singing, I’ve been thinking about my sound as a singer. I guess, I was really so heavily influenced by bands like Evanescence and Nightwish and Epica and Kamelot that I tend to use, or at least attempt to use, that mezzo-soprano sound in songs I write or cover. But really, I do envy female singers who have that rock edge in their voice. Especially Lzzy Hale’s. I’m still trying to sing Shatter Me and I’m still struggling. The verses are comfortable for me but the chorus is killing me. What she does is scream-sing the “shatter me” stanzas. Which is awesome. Which I can’t do. Hahahaha! So now I need to find a way to sing it my way. Doing covers may seem like an easy thing but it’s actually difficult. You either cover it 100% completely or you cover it in your own style but you risk overdoing it. I think once I can carry Shatter Me and Let It Go (yes, that Frozen song) without struggling, I’ll know for sure my singing has improved. Le fiance said I’ve become better but personally, after not singing for so long, I feel like I’ve regressed. While the guys I did covers with (featured in the above jamming videos) don’t dig my symphonic metal influences, le fiance has been supportive instead. He heard me karaoke to Nightwish’s Wishmaster and he liked it; both my singing and the song hahaha! (The misheard lyrics are super funny hahaha!) The song is not easy but I’ve somehow managed to find a way to sing the high notes of the bridges through my mezzo-soprano sound and then sing the verses using what I feel is my speech-level singing. Have a listen to the original.

Le fiance enjoys playing the guitar solo of the song. He really likes playing challenging stuff. I think essentially all musicians enjoy making progress in the craft. Not for recognition but for increasing the sense of appreciation for music. You won’t really appreciate a piece of music or the musician playing it until you understand the technicalities of it or attempt to play it. I guess it’s good that I enjoy challenges? The more difficult something is, the more I have a go at it.

Let It Go may seem like a simple kids’ song but I find myself getting easily breathless when singing it, especially the bridge to the final two chorus. Oh, my God. That’s just. Hard. I need to work on my air capacity. And that means… exercise. Hais. I’ve been hibernating for months now. I really need to get back to exercising. Gyabon.

Hais. I have the rocker look but I just need the rocker sound to match it. Hahahaha!

And yep, no, I’m not over how even better Lzzy sounds live. Hahaha! I actually wanted the guys to cover this with electric guitars instead because well, none of us can play a violin, but their influences are more to the old school metal like Metallica and Iron Maiden. It’s okay though. Maybe by the time I can finally carry the song, I can sing it with le fiance on guitar and we’ll just get sessionists to back us up. Even without sessionists I can imagine both of us together on stage playing to a backing track. But I would enjoy a stripped down acoustic set as well. Hehe. Like this:

And we can smile at each other like that too while performing. The two of us are resolved to try and perform for free at Esplanade, even if it is just at the concourse. I think that would be a great milestone for us as Rubber Bandits.

But yes, we don’t want to just sing covers but we want to sing our original songs. Both of us are songwriters, which is definitely great because that makes things much easier for us to come up with originals. And it also helps that we both have very different musical influences so that makes the songwriting process interesting.

Yes, Huda is not all rock. Maybe Beedin and I should write a song involving rap like Bed Peace. Hehe. That video made me fantasise about how it’ll be like if Rubber Bandits should ever be popular. I’ll probably be the one doing most of the talking in interviews like the video but I know le fiance will cover for me on those days when I feel all-peopled-out. He is more talkative than I am. I’m really more of a listener.

Yeah, I reposted a lot of videos that I have posted so many times when I blog hahaha but they’re so good! :p

And Allah is Al-Mujib, the Responsive, the Answerer. – MM