Yo! So it’s been like a month since I’ve blogged. Whut.

That just shows how insanely tired out from work I have been.

I mean a five-day work week sounds like a good deal but when you’re dealing with long hours and long streaks of working days, oh, you’ll definitely feel the burn.

And more fats than muscles when I carry loads and go up and down the stairs.

Well, Danial would say, it’s because I don’t drink water.

Le fiance will most definitely agree with that.

I think everyone in the world will agree to that.

But no joke seh. One of the six basic policies of UNIQLO is that you have to be quick and energetic.

Do that for like nine hours a day, five days a week, and let me know how it is for you.

On the other hand, it feels good whenever people and other companies admit that our service is tip top.

Because bloody hell, we have to always put in a good shift, so it better pay off! Hahahaha!

I’m blogging because… my fiance can’t talk to me right now!

He has started work! Yup yup! As a permanent full-time Night Filler at Giant. Hehe. However, he’s currently not stationed at the Giant near his house. He’s attached to a training centre instead, but still luckily close to his home, and he’s not on night shift yet. He ends at 10pm today. So I’m just killing some time while waiting for him.

I guess this is how it feels for him when waiting for me to end work?! Hehehe. It’s so agonising!

I miss my baybee so much huhu.

YES, I ADMIT. I’M SAPPY RIGHT NOW. AND I’M ONLY GETTING SAPPIER. HAHAHAHA.

The following is a picture of le fiance when he was in his 20s? He used to work as a bar musician. Yes, yes, that lovely man playing the guitar. SO HAMSUM! WAW. ^v^/ 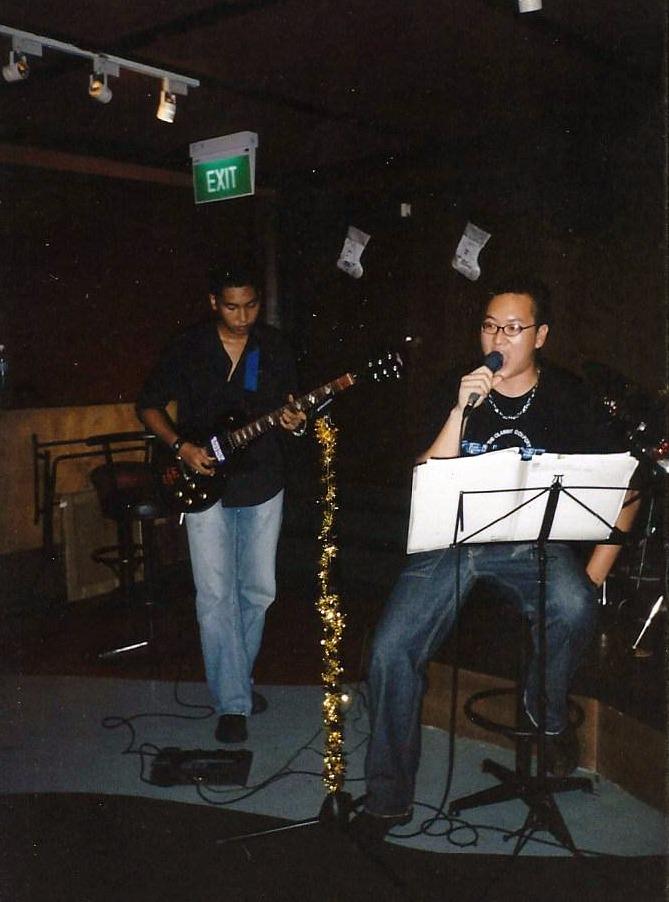 I can definitely see why he attracts all the chicks. I’m so jealous!

I feel like I shouldn’t say this because it’s his story but I kinda wanna make a point.

In fact, he could still have access to both if he wanted. He received offers from other musicians to play for them. Even ones who are recognised by the mainstream Singapore audience. But he turned them all down. Because to him, he just wanted to make music out of passion.

Basically, he just want to do his own stuff but people just wouldn’t leave him alone.

But when he needs a loyal companion, people wouldn’t stay with him.

It was certainly very paradoxical for him so I could understand why he was the way he was.

He just needed somebody who is a little bit different than anyone else who could show him a different view of the world and more importantly allow him to be himself.

Yes, he may seem like a ‘hard’ man. Tough exterior. Handles his alcohol so well that he just gets high but not drunk. Plays guitar like a pro and sought after by local professional musicians. He was a skater. Like Tony Hawk skateboard kind of skater until his friend dropped his beloved skateboard into the canal. He did martial arts and went beyond white belt.

When deep inside him, oh, my God, he’s just a softie.

He loves minions. He just goes crazy over them. He loves animals. He loves jazz, blues, and ballads. And recently I found out, he loves drama. I introduced him to three animes so far: Trigun, Sailor Moon, and most recently, NANA. He was sooo moved by NANA that he said he could feel how I relate to it so much. Like as though he was watching me watching it. And watching NANA changed his mindset from playing with no interest to go professional to actually having an intention to go pro. I think he finally sees that going professional doesn’t necessarily mean it’s all about the fame. Going professional really means constantly honing your skills to a higher level so that you can have a sense of pride presenting your work to the world.

And muahahaha fate has it that he bumps into me in his life when he had nothing. He had everything but life happened, causing him to lose almost everything he had. As if life isn’t cruel enough, little old me crossed his path. MUAHAHAHAHA!

I really shook his world. Yes, I’m paying compliments to myself but that’s not the point, shh! I challenged his views…a lot and he can tell you how annoying I can be when doing so muahahaha! I reignited the fire in his belly for his passions in electronics, computing, programming, music, games, movies, TV shows, and even going out for that matter. The thing about him being a softie is that he tends to give in easily. So that was the case with his exes. They kind of stuffed that fire out of him because they had different interests or they just don’t get his passions and he was sooo unconditional in the way he loves them and was such a considerate lover that he always sets himself aside. In fact, in his entire life, he has been putting himself aside for others. He really is a good student but due to financial pressures, he had to work at McDonald’s during the crucial N-level and O-level years. Hence, he didn’t graduate with stellar grades. From then on it was just work work work. There wasn’t really an allowance for him to continue his studies, especially when his dad passed away so he became the head-of-the-household. So suddenly everybody was in his care. So he had to take care of everybody else first before himself. Then there was a time whereby he was so close to settling down and starting a family. Life happened again. In the midst of caring for a terminally ill mother and a sister with a troubled life while juggling a long-distance relationship, his ex cheated on him. And just like that his life changed. He broke up with his then-fiancee. He couldn’t work anymore because he had to be a full-time caregiver for his mum. His triple-digit-K savings depleted quickly due to the expensive medical costs incurred by his mum’s renal failure. And because he didn’t have anymore money, he had to “pull the plug” on his mum’s life.

Even I feel a lot of pain just writing about it.

So after the passing of his mum, he doesn’t have to care about anyone else but himself, he is free to do what he wants. But how can one get over such a tragedy so easily right? Especially when it was not only one tragedy but so many bad things happening at the same time. He didn’t immediately pursue his passions. He was just getting on with life day by day. I chose not to use the phrase ‘living day by day’ because he wasn’t really living. And somehow, he got pulled into music by a buddy. And that was at the same time when I decided to pursue passion instead of romance. And so we met through a jamming session as two strangers who were passionate about music.

And we just started talking and then me being me, I proposed to him, “Will you just marry me already?” and of course, as usual for me and my streak of unrequited love, I was rejected of course HAHAHAHA!

But that was probably the most correct thing he did.

I think it was extremely important for our relationship; that we started out as friends. Because remember what I said earlier, the two things in life that he really wants are:

Anybody who knows me, knows that I am a strong advocate of standing on your own two feet and being bold in pursuing your passions. And to a certain degree, I believe it was my fault that I nurtured the ego of someone in my past to the point whereby with the confidence he gained back, it turned into arrogance towards me instead. That’s completely my fault because I’m too soft. But anyway, this little old me was constantly egging on le fiance to explore and discover a lot of things that he had long forgotten, especially his interests.

And man, was it hard to just be his friend when I’m harbouring feelings for him. But I had to discipline myself in locking away my feelings because I genuinely wanted to be his friend.

I remember at one point of our friendship, we grew a bit distant because suddenly a lot of people from his past re-entered his life albeit virtually through FaceBook. I shared with him this as well; that I was hurt to see a snippet of his convo with his ex unintentionally. He was talking a lot about moving to The Philippines as well and being a citizen there. I, being myself, I vlogged about my feelings while in South Korea on my personal YouTube account. It’s still there if you can find it. Tearing up in my baju kurung omg so emo hahaha! I talked about my confusion, I think, about how he shares all these plans about being in a band with me yet he wanted to move away…like how is that supposed to work?! Hahahaha!

And little did I expect that he watched it…

…and that it made him thought a lot about us.

Did he really choose me over all other girls he could have had?

Who were far more attractive and seductive than I was?

Was I really worth having that he would turn his back on a life he could have had in The Philippines? A life free from responsibilities? Him staying in Singapore and being with me means he is back to having to take care of someone. It’s like back to square one when he had to set himself aside in order to take care of others.

So those kind of thoughts always drive me to put in some effort in our relationship and in building our future together.

Here I am, in a humbling job, starting from the bottom in order to build something great out of nothing.

And then here we are, two people starting from the very bottom in the retail industry. 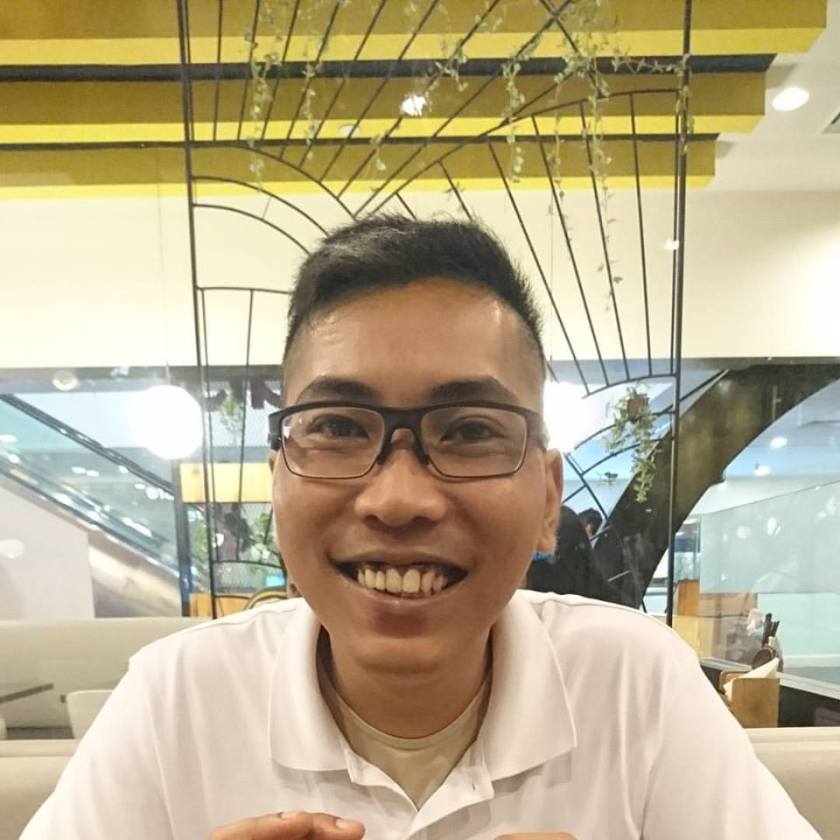 He is now your friendly neighbourhood Sales Assistant 2 with Salary Grade 1 at Giant! Yay! Let’s clap!

We have both decided to work our way up the corporate ladder in our own companies. Coincidentally, the next step up for the both of us is the Team Leader position. Insha Allah, we will both get there one day.

But first! We both need to get our confirmation. Gyabon. XD

On an ending note, if we were all to think about it, he was a bad boy turned good and I’m a good girl turned badass. Well, okay, I’m still working my way on becoming more badass but thanks to le fiance, musically, I have become less timid. Even he remarked on how much my singing has improved. Hehe.

And Allah is Ar-Raqib, the Watchful. – MM

Born 1989. Female. Metropolitan Muslimah. Songstress. Teacher in the Early Childhood Care and Education sector in Singapore. Gooner since the signing of Mesut Özil on 2 September 2013. We won two back-to-back FA Cups since. Made my first trip to the Emirates on 10 May 2015 followed by my first home game against Swansea City on 11 May 2015, which we lost 0-1. View all posts by Metropolitan Muslimah